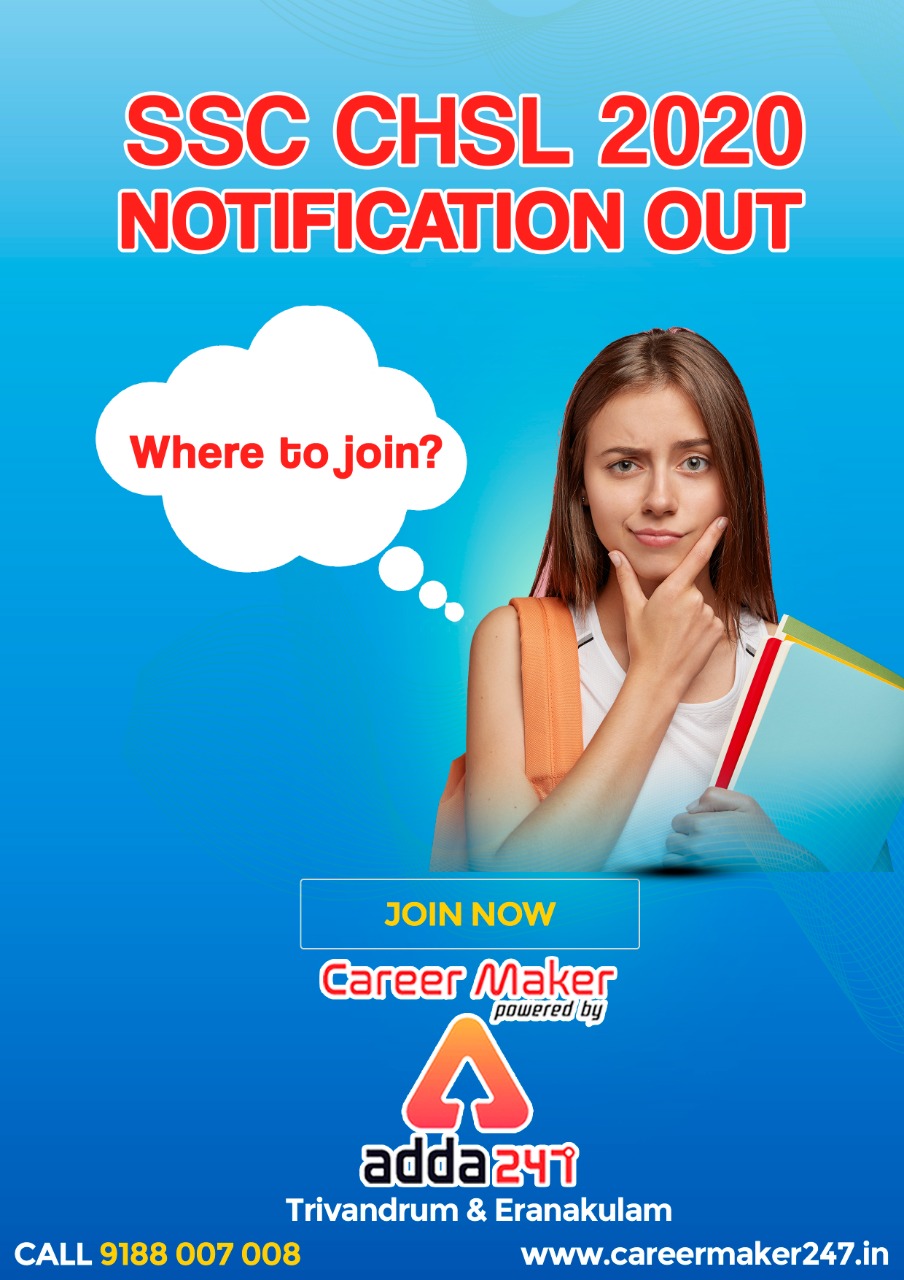 Staff Selection Commission (SSC) is the most desired organisation for Government exams in India. SSC CHSL (10+2) is the exam that the post i.e. Lower Division Clerk, Junior Secretariat Assistant, Postal Assistant, Sorting Assistant, and Data Entry Operator posts. SSC selects and recommends candidates for Assistants / Clerks posts by conducting a computer-based test, descriptive paper, and skill test, or typing test.
Every year the Staff Selection Commission conducts an examination as SSC CHSL for recruitment in Ministries/ Departments/ Organisations of the Government of India. The Staff Selection Commission (SSC) has been conducting the Combined Higher Secondary Level (CHSL, 10+2) Exam for recruitment to various posts like:

SSC CHSL RECRUITMENT 2020-21
Thousands of vacancies are filled every year by SSC in Government departments. SSC is the profound leading Govt. organisation that employs lakhs of students in India.
The SSC CHSL exam is held in 3 stages called (Tiers) i.e. Tier-I, Tier-II, Tier-III.
The first one is online the latter two are offline exams. The entire process of registration and communication happens online through the official website of SSC CHSL. Candidates must qualify for each stage of the SSC CHSL exam to go to the next one, before being finally selected.

SSC CHSL ELIGIBILITY CRITERIA
There are 3 important criteria that a candidate must fulfil to be eligible for the SSC CHSL 2020. The 3 parameters are given below:
1. Citizenship: A candidate must be either:
(a) a citizen of India, or
(b) a subject of Nepal, or
(c) a subject of Bhutan, or
(d) a Tibetan refugee who came over to India, before the 1st January 1962, to permanently settle in India, or
(e) a person of Indian origin who has migrated from Pakistan, Burma, Sri Lanka, East African countries of Kenya, Uganda, the United Republic of Tanzania (Formerly Tanganyika and Zanzibar), Zambia, Malawi, Zaire, Ethiopia, and Vietnam intending to permanently settle in India.
2. Age Limit: Age limit for the posts is 18-27 years as of 01-01-2021 (i.e. Candidates born not before 01-01-1994 and not later than 01-01-2003). Permissible relaxation in upper age limit for different categories are given below:

EDUCATIONAL QUALIFICATION:
For the post-LDC/ JSA, PA/ SA, DEO (except DEOs in C&AG): The candidates who are planning to appear for SSC CHSL 2020-21 exam must have passed the 12th Standard or equivalent examination from a recognised Board or University.

For the post of Data Entry Operator (DEO) in the Office of Comptroller and Auditor General of India (C&AG): 12th Standard pass in Science stream with Mathematics as a subject from a recognised Board or equivalent.

SSC CHSL APPLICATION FEE
• The required application fee is Rs. 100/-
• Exemption: No fee is required to be paid by female, SC, ST, Physically Handicapped, and Ex-Servicemen candidates
• Applications fee should be paid only through SBI either in the form of challan or through SBI Net Banking or any other bank Credit/Debit Card. Challan form will be generated online
• To pay the fee in cash, the candidate should take a print out of challan generated online after the completion of Part-1 registration. Deposit the requisite fee in any branch of SBI and then continue with the Part-2 registration
• Those candidates who want to pay online can go directly to Part-2 registration after completion of Part-1 registration. Candidate must supply registration number and date of birth to continue to Part-2 registration

For the students who are going to begin the SSC CHSL preparation, it is important to make note of changes in exam pattern and syllabus. The modifications to SSC CHSL Exam Pattern 2020-21 are given below:
 SSC CHSL 2020-21 Tier 1 exam will be conducted in online mode.
 Introduction of a descriptive paper of 100 marks within 60 minutes in pen and paper mode.
 Reduction in the time limit for examination of Tier -I from 75 minutes to 60 minutes.
 v Tier III will remain the same.
 No Sectional Cut off.
SSC CHSL 2020-21 SYLLABUS
As the SSC CHSL is consisting of 3 different levels, aspirants must keenly deal with the syllabus individually.
As it is an objective exam which will be conducted online. There are 4 sections in the Tier 1 exam of SSC CHSL 2020-21, with 100 questions which account for a total of 200 marks. The subject-wise details are provided below:

 There is negative marking in SSC CHSL 2020-21 Tier 1 Exam. Giving a wrong answer to a question will lead to a penalty of 0.5 marks in all sections
 The exam duration is 75 minutes for candidates who are visually handicapped.

SSC CHSL TIER 2 EXAM SYLLABUS
This is a descriptive exam that is designed to test the written skills of the candidates in English/Hindi. The Paper would comprise writing of an Essay of 200-250 words and Letter/Application writing of approximately 150-200 words. The minimum qualifying marks in Tier-II would be 33 percent. The performance in Tier-II would be included for preparing merit. The best way to prepare for the same is to read lots of articles from various newspapers. Apart from this, you need to be well aware of the pattern of Letters and Application.
Important Points:
 The exam is of 60 minutes’ duration and carries 100 marks.
 The questions are based on 10 levels.
 The exam is qualifying in nature.
 Part paper written in Hindi and Part in English will not be evaluated.
 The exam duration is 80 minutes for candidates who are visually handicapped or suffer from cerebral palsy.

SSC CHSL TIER 3 EXAM SYLLABUS
Tier 3 of SSC CHSL Exam 2020-21 comprises a couple of skill tests that are required for certain government posts.
Skill Test for Data Entry Operator (DEO):
 Data Entry Speed of 8,000 (eight thousand) Key Depressions per hour on Computer.
 The duration of the Test will be 15 (Fifteen) minutes.
 Typing Test for Postal Assistant/Sorting Assistant LDCs and Court Clerks:
 Typing Test will be conducted in English or Hindi and candidates while applying for the Examination, will have to indicate his/her choice/option for Skill Test Medium in the Application Form.
 Typing Test will be of qualifying in nature.
 It will be administered on the Computer, to be provided by the Commission or any agency authorised by the Commission.
 Candidates opting for English medium should have a typing speed of 35 words per minute.
 Candidates opting for Hindi medium should have a typing speed of 30 words per minute.
 The speed will be adjudged on the accuracy of typing on the Computer of a given text passage in 10 minutes.
 Visually Handicapped candidates (with 40% disability and above) will be allowed 30 minutes.

Note: After the skill test or typing test, those candidates who qualify, will be appointed based on their position on the merit list.